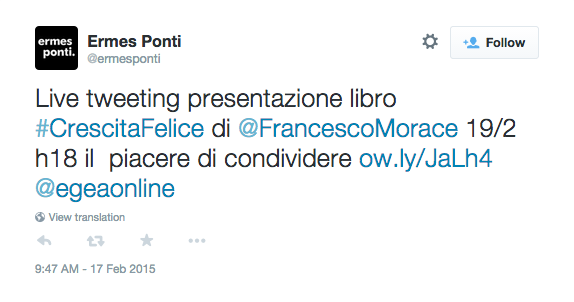 It was February 20th, 2009, when Professor Morace launched “Il Senso dell’Italia”, which gave rise to the adventure of Italian Rennaissance and to books about a company’s own talent, which also involved us of ermesponti.

Exactly six years later, February 19th, 2015 – in the same Hall of Honor of the Triennale in Milan – Francesco Morace launches a message of optimism and hope for our country just from the title of his new book:

In our own way, we would celebrate this event with an open sharing of the concepts that Francesco Morace will explain, through our Twitter channel @ermesponti with the hashtag #CrescitaFelice.

It’ll be a pleasure to dedicate a complete live tweeting to the presentation of the book and the ensuing debate, from 6 pm up to the end of the meeting.