The media often refer to Luxury as one of the contemporary obsessions.

And off with diagrams (the capitals of luxury and so on), European market figures (17 billion), growth trends (400 million people, consumers 35-40 yrs. old in continuous growth), by top consulting firms… and even customer labels: socialwearer, experiencers, absolute luxerer.

A quote about the latter:

The most coveted prey (notice: prey) among top companies, she’s the rich, refined, elegant absolute luxurer.
She belongs to the European elite and the Happy Few emerging market, spends on clothes and watches but also for travels and wines, with a particular attention to everything unique and customized. She generates a market worth billions of euro per year at a cost of 30,000 euro per person.

Also the growing interest of consumers in respect of social and environmental sustainability is growing (from 8% to 13%), especially in Europe and the US.

All of this comes in addition to other values, increasingly relevant ​​to those in need of a product: quality, craftsmanship, exclusivity.

All positive concepts and values – obviously – especially for our beloved Made in Italy that, despite the painful contraction of the domestic market, still stands as one of the largest exporters of these goods defined luxury.

But then I think…

Can we accept – as Italians – to reduce the idea of luxury to unnecessary goods for the rich? Can we tolerate a concept of luxury merely linked to exclusivity and price, as suggested by the media?

Mr Riccardo Muti helps us in this with the great interview he gave to  Nicoletta Polla Mattiot. He said:
“Luxury is a whisper”
Intrigued, I look further, and I found a wonderful articole on his Facebook Official page: “The luxury of being Italian.”
Sounds even better, thank you mr. Muti. 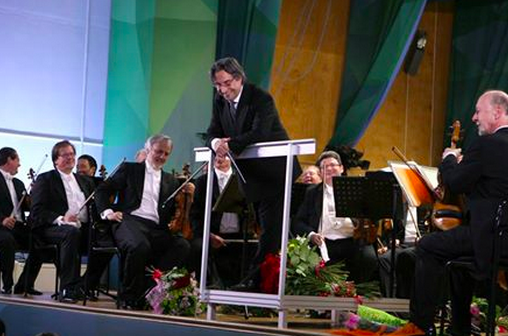 Mr. Muti’s Idea of luxury is freed from numbers and market values, to approach intangible values:
.

Everyone should study music (note: or architecture, which in the Renaissance was the same thing): it refines the soul. It leads us towards a better society

I fully agree.
And, what does Mr. Muti look for, when creating music?
.

What you do not see. What lies beyond. Mozart used to say that music is deeper in the middle, between the sounds and in the sounds

(Just like architecture: not in columns but in the spaces between the columns…).

And yet, the Mr. Muti expresses pride in being Italian: “Being born in Italy is a privilege. I’m proud of my passport and I’d like no other.”

He continues: “As an orchestra leader, I can follow the musical lines of 120 people playing together. I can follow them altogether, but I also perceive each one of them. They all move forward to a common goal: beauty”

And finally, on luxury:
.

There’s a wonderful luxury offered by music (notice: offer, for free); intensity in elegance, slow and intensive playing, as Toscanini taught us. by Toscanini. It’s also a way of life. Feel the simple, topical difference between screaming “I love you” or whispering it

Touching, isn’t it?
Says Mr. Muti: “I think music shouldn’t be a privilege for the few, but a right for everyone. And it’s a public issue to teach it. No one can own the music.”

Luxury can be seen, therefore, as intangible, cultural, almost spiritual. Is the invaluable value that has shaped the spirit of our culture, in the forms of our art, music, architecture, literature.

We try to define it, but we can’t; it sure is “a whisper” more than an obsession. We can all hear it, but few people really feel it, because it’s not in things, but between things, beyond things.
Condividi:
Tweet